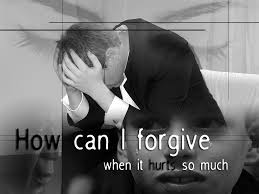 BBC TV are currently running a short series “The Gift” in which people from many walks of life want to find an opportunity to say “I love you” or “I’m sorry” or “Thank you” to people whom they have been unable to contact.

I was deeply moved by the efforts of a  former school bully who, haunted by his past, hoped to finally apologise to his victim.

In the show, Matt Baker, the presenter, helped 51-year old Jon Howe in his quest to absolve himself of his nasty past, by tracking down his former victim Simon Pierce.

Simon Pierce had been traumatised by the eleven years that he had endured, up to the age of 16 years, being bullied on a daily basis by Jon Howe and his mates.

He told Matt Baker that the experience had affected his well being, but that he had moved on in his life, and that although he would agree to meet Jon Howe and hear his apology, he would not be able to forgive him.

Jon Howe, had suffered with the trauma of the bullying that he had inflicted on Simon Pierce for a similar number of years after becoming increasingly troubled by the events of his schooldays in his mid-thirties until the present time. His family described him as a lovely man who genuinely could not move on with his life without having an opportunity to apologise to Simon.

The meeting was arranged for the two to meet. It was obvious to Simon in his first moments of eye contact with Jon, how deep the pain ran within him and subsequently during their conversation Simon told Jon that having thought it would be impossible to forgive him, he was able to say “Yes, I do forgive you”

Both men emerging from those few words “Yes, I forgive you” liberated from the past.

I wanted to comment on this reconciliation because I also experienced a certain level of bullying from a young age. I was hit everyday for a few years by an older boy from another school who passed me on the street with a thump without saying a word.

It severely dented my confidence and I think contributed to a lot of the anger which subsequently emerged in my life in later years.

Most of us are not going to get a TV apology, but the idea of liberating ourselves from the past by saying “I do forgive you” might be worth a shot!

My next blog will be : Alcohol Free